Have you heard of the name Maytag? I’m sure that you have, especially if you have ever used a washing machine. You’re probably wondering where I am going with this and you are definitely wondering what washing machines have to do with Craft Beer; its simple really Frederick Louis “Fritz” Maytag III (aka the Godfather of Craft Beer) the great grandson of Frederick Louis Maytag I, is the reason you and I can still grab a beer from Anchor Brewing Company. Yet it is so much more than Anchor Brewing, it’s what Fritz did for the entire Craft Beer movement that makes him special to the world we live in today.

In 1965 Fritz Maytag was out at his favorite watering hole in San Francisco enjoying one of his favorite beers. That beer happened to be a Steam Beer from the small local brewery Anchor. His bar tender struck up a conversation with Fritz asking if he had ever been to the brewery and seen their set up? (That was a leading question since Anchor brewery was set to close their doors at the end of the next week.) Fritz not wanting to miss the opportunity to see that part of history went down to the brewery and was amazed at what he saw. It wasn’t a large set up but it had history and Fritz didn’t want to see that disappear, so he did what he thought he should do and what the bar tender was hoping he would do and invested in the brewery.

He originally thought the few thousand he invested for his 51% ownership would just allow him to step in and offer financial support and maybe a little business advice, he quickly realized this was a much larger project as the IOU’s began to roll in. He had just bought a sinking ship and he was the only one holding a bucket. As soon as he purchased the majority stake he was informed the power is going to be turned off the very next day and the kegs they had leased were due to be returned at the end of the week. Being a young scion, their debts did not seem all that overwhelming but they were a small company and had gotten slightly over their heads, so Fritz just went ahead and paid off all the debts. While the company had its share of debts it had very little overhead having one employee who was lacking in work to do. The total beer sales at that point were around 600 barrels a year, meaning maybe they were doing one batch a month. After a little reading up on accounting Fritz realized problem number one, they needed to sell more beer.

So, Fritz took his determination and hit the streets going out to raise their tap handle count from possibly 10 handles to as many as he could get. The first big problem started with the bars; as he would sit and talk to the owners or the bar tenders they all thought that Anchor had gone out of business. It took some convincing by throwing a party at the brewery but eventually he got their business. The next thing he had to deal with was the looming fact that he had to admit the beer tasted bad, as one bartender put it the beer tasted like “rusty pipe water”. The beer was going bad faster than the bars could sell it causing a bad taste in everyone’s glass and a bad memory to go along with the name Anchor. So, knowing that he needed to make changes to the beer Maytag wore out two volume beginners brewing guides and started to take master brewing classes.

Early on at Anchor he invested heavily into revamping the company and expanding out its capacity. In doing so he had to take out some large loans and for collateral he was required to put in Maytag stock and in the late 60’s when the market fell his lenders required he put up more of his inheritance. For 12 years he put all that he had into the brewery sparing little time for family and friends and his wife left him during the process fearing he was wasting not only his money but his time. All the while Maytag continued to work on the beer making it profitable and in doing so he worked on both the recipe and the brewing process. It took a while but over time the beer burst into popularity, and with popularity came the chance to move and the brewery once located on the upper levels of a building in San Francisco’s Design District moved to a nearby spot in Potrero Hill, staying in the San Francisco area due to its historical connection.

Demand continued to go up and he struggled with the idea of expanding and what that would mean for Anchor Brewing. He considered looking for investors and bringing in capitol to become a large company but instead Fritz was saved by the most surprising people of all, his competition, small breweries were on the rise and opening up all around him. The Microbrewery had arrived and Fritz seeing the value in the microbreweries helped them to grow and develop their own brewing styles. They ended up growing fast enough that the demand to grow his own brewery was diminished allowing him to focus on the craft and not the speed of the beer being made. It is a rare thing to hear a company say they are glad that the competition took away demand from their product, but it is better that then losing customers by raising your prices.

So, even though you may have never heard of him before, just know that the craft beer you are enjoying today was partly made possible by this man and the efforts he put in getting the microbrewery revolution going. 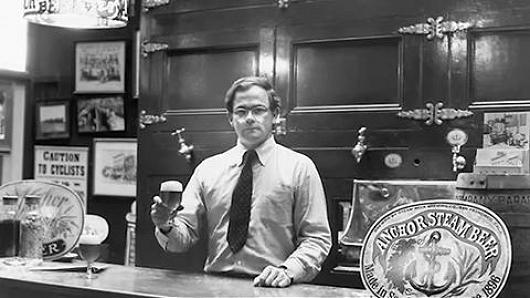